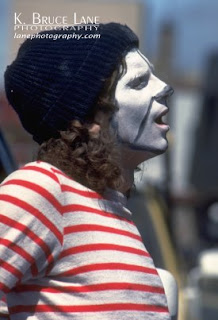 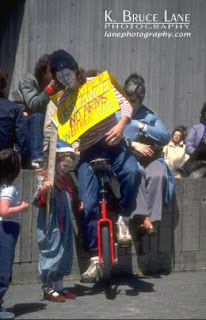 In the early 1980's there was a Peace March in downtown St. John's. Of course, I attended the march with my 35 mm camera in hand. I am sharing two of the photos this morning.
The first shows a young man with a peace symbol painted on his face. I shot another photo of him when he got on a unicycle and talked to a young girl in a clown costume. I believe this person in Beni Malone, who now owns a circus in St. John's, and his daughter who is also a circus performer. The sign says "Proper Balance: No Arms on Either Side".
If I remember correctly, I took at least one roll of 36 slides during the parade (a cost of $16 in the early 80s). Obviously all the people I photographed on that day are 25 years older now and may never know themselves if they saw the photos. I can share these photos because they were on public display.
at December 23, 2008

Women in the Fishery Quilt

Women in the Fishery Quilt Nearly 20 years ago, a group of women from the Southern Avalon created the quilt shown above.  It shows the many ... 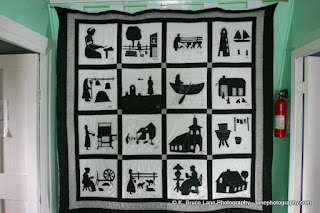