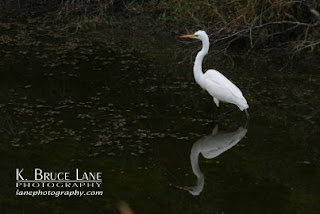 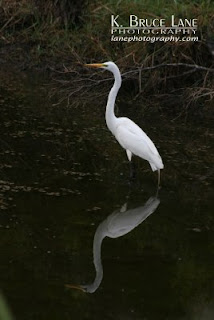 This morning I am using two photographs of a great egret to illustrate the difference between horizontal (landscape) and vertical (portrait) images.
A friend once asked if I thought about "selling" a picture as I was taking it. I had to think about it for a few minutes before replying that usually I didn't think about selling an image until later when I was editing the photos. However, occasionally I will think that a photo may be good for a cover of a magazine and I will shoot a vertical image to make sure I have one if I ever needed it.
The first image shows a horizontal view of a great egret fishing in a small stream in Florida. Because the bird was in a shaded area, I knew that the background would be fairly dark compared to the white bird. I liked the reflection in the water as well. In order to capture the bird and it's reflection I had to zoom back leaving a lot of space with very little detail.
I rotated the camera and zoomed in which got rid of much of the background. I left a bit of room neat the top of the image for a title in case a magazine wanted to use it. This would be a decent image to use as a cover because it has lots of room for text.
When photographing subjects I often shoot vertical and horizontal images just to have both formats in my files.
at December 28, 2008

St. Anne's St. Anne's Church is located in Conception Harbour and I photographed it in 2001. I decided to create this album with the... 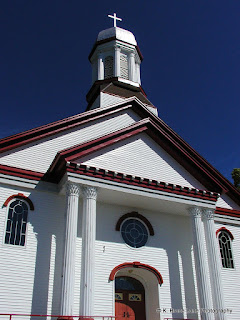