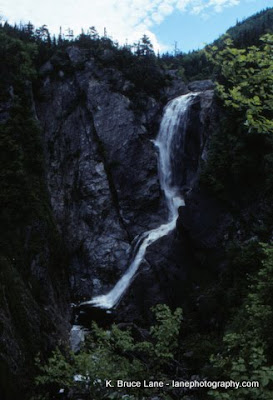 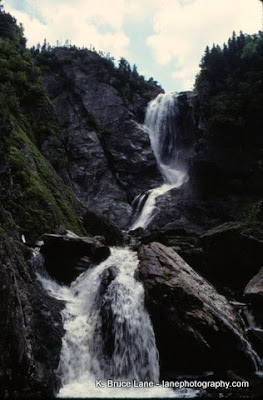 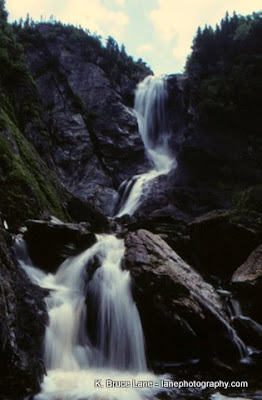 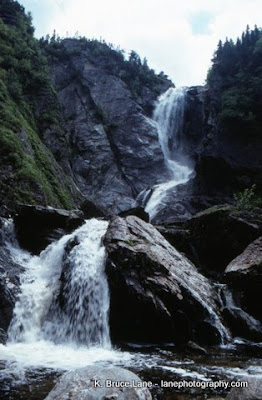 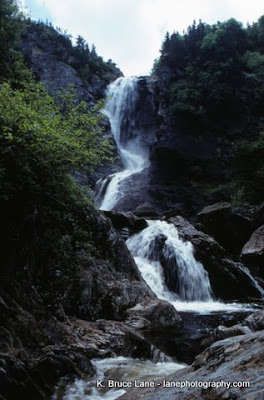 Coincidentally, I was scanning photos of Steady Brook (near Corner Brook) as the letter S in my alphabetical series approached. In the summer of 1984 I decided to photograph the waterfall which was only partially visible from the highway. I had to walk to the falls by walking up the ski slopes at Marble Mountain, then cutting through the woods to find the waterfall.

The first photo was taken as I approached the falls, but trees blocked my view. I continued my hike until I stood at the very top of the falls. I was a little disappointed because I wasn't able to capture a decent shot of the falls from any location. As a result, I decided to climb down the cliffs and shoot the falls from the bottom.

The climb down was treacherous because the rocky cliffs were wet and I had to climb over many dead trees. When I reached the river I was able to shoot photos of the entire waterfall. The second and third shots were taken from the same location. I didn't have a tripod with me but wanted to try a shot using a shutter speed slow enough to capture the movement of the water without ending up with a photo that was totally out of focus.

Photos of the Day are for sale as stock photographs
and photographic enlargements.
They can also be purchased as slide shows
and/or wallpapers/screensavers.
at April 05, 2011