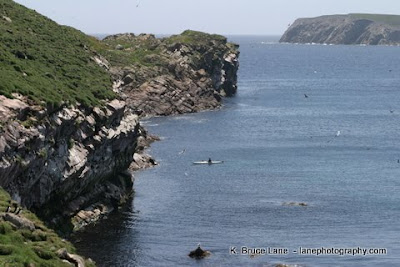 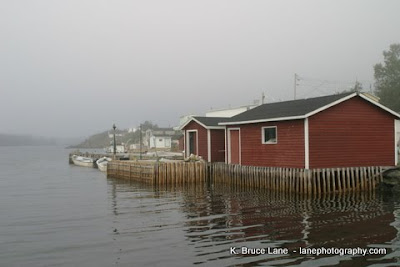 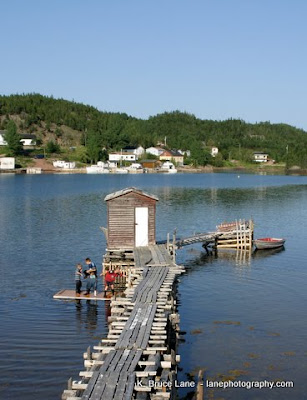 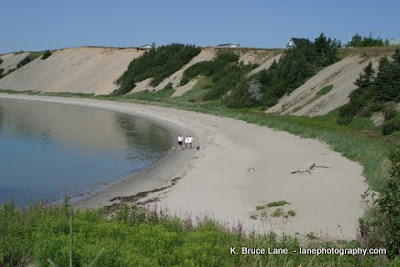 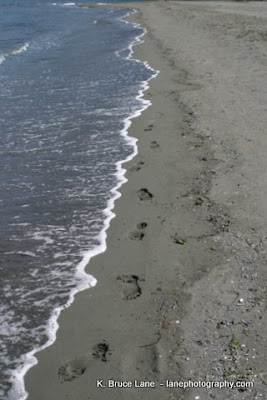 For the next few days I plan to share photos of Seascapes. With over 29 000 km of shoreline, Newfoundland and Labrador is a seascape photographers' paradise! You will notice that I have chosen photos of the coastline whether it be sandy beaches or steep rocky cliffs.

The kayaker in the first photo must have had a good view of the steep cliffs on an island near Witless Bay. While a kayak seems like a good way to travel, I can't see myself taking along all my camera gear. I know a few kayakers who take waterproof digital cameras with them on their travels.

A calm, foggy morning in Triton-Card's Harbour in Green Bay was good for making photos. I returned to the same spot a couple of hours later and photographed the same scenes with a bright sun and blue sky.

A fishing stage in Robert's Arm, also in Green Bay, was interesting enough to make a photograph, but a few kids playing nearby added interest to the scene. I remember hanging out and playing for hours around fishing stages in communities our family visited when I was a young boy!

Sandy Cove Beach is a long sandy beach located in Bonavista Bay. It wasn't very busy when I photographed it in the early morning light. I have been here when it was very crowded, but will have to wait until I scan the slides from that trip.

I photographed my footprints in the sand of Salmon Cove Beach in Conception Bay. I made several images as the water crept towards my footprints and started to erase the evidence that I had walked there.

The sea is pretty calm in today's images, but, as you can imagine, there are many days that the water isn't quite as calm as depicted today.