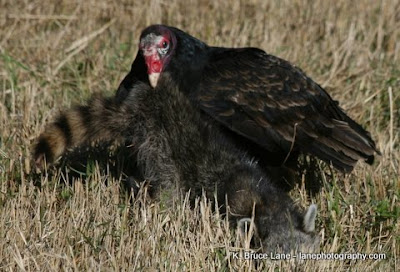 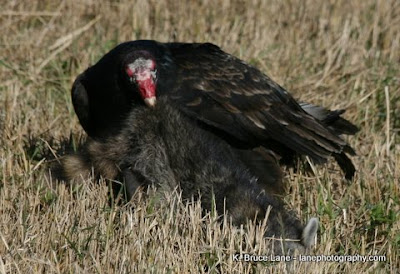 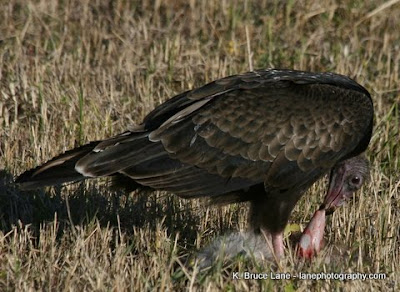 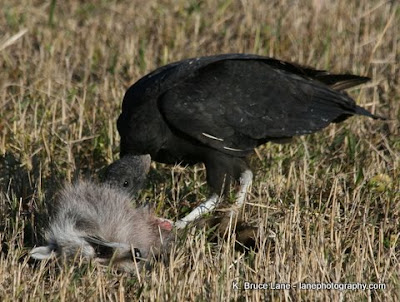 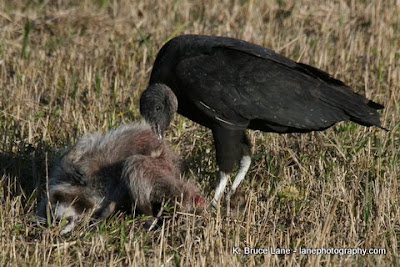 Even though I was moving around while taking photos, a second vulture landed in the field nearby. I decided to move closer using the same technique that I use when photographing other species of birds - take one step, stop, take pictures, move again when birds aren't looking and repeat the process until they start to move away. I always take photos at each stage for two reasons: first they get used to hearing the sound of the camera and secondly, because they can take off at any moment, I wouldn't want to miss getting photos of them along the way.

A few minutes of standing still was enough time for the vultures to get used to me because both birds started moving towards me instead of away. Next, one of them started eating something in the grass. Soon afterwards I could see that it was a small raccoon and both birds took turns picking at it. A few times the vultures would pull it further away, probably because they were a little nervous of me.

Some of you may be grossed out at these photos, but the vultures are just doing the job nature gave them - getting rid of dead animals. To be honest, I was enjoying making photos and watching the behaviour of the vultures as they ate. It felt like I was on the set of an exotic nature film.

Photos of the Day are for sale as stock photographs
and photographic enlargements.
They can also be purchased as slide shows
and/or wallpapers/screensavers.