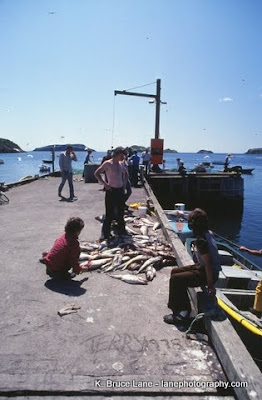 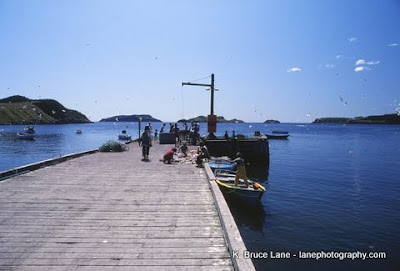 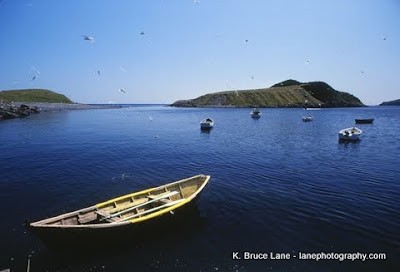 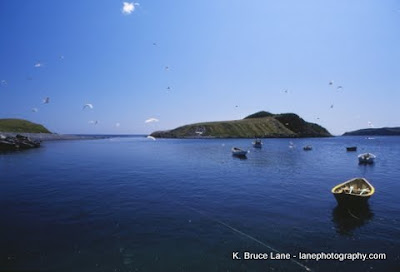 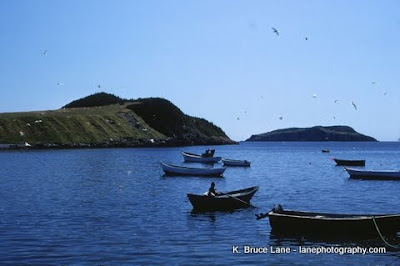 Thanks for the comments on this series in which I am sharing photos taken in Communities along the East Coast Trail when I first moved to this area in 1981. Today's photos show interesting views of the Town of Tors Cove.

Over the years, the busy wharf shown in the first photo fell into a state of disrepair and no longer exists as shown. Large pieces are missing and the parts that still remain do not look safe.

The wharf scene also tells a little about outport culture at the time. You can see fish being thrown onto the wharf from a small boat and kids waiting to cut tongues out of the large cod, In the background fishermen are splitting the day's catch of codfish. This photo was taken a decade before the Cod Moratorium, which closed the cod fishery in this province for years. Even now there is only a very limited cod fishery here. There have been many changes in the fishery in the past 30 years!

The images of the harbour with boats and islands in the background would be much the same today except, there would prbably be fewer boats there now.

Photos of the Day are for sale as stock photographs
and photographic enlargements.
They can also be purchased as slide shows
and/or wallpapers/screensavers