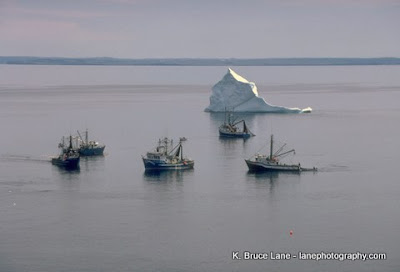 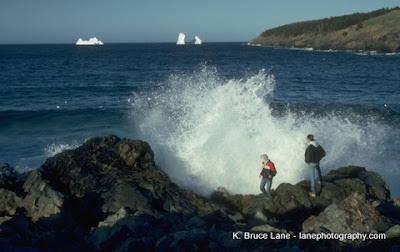 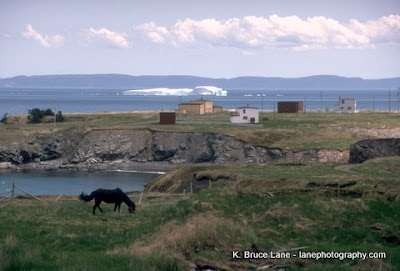 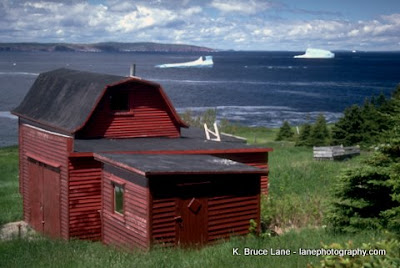 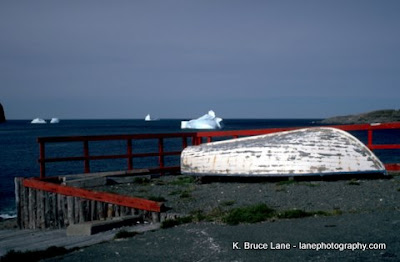 As you may already know, the area between Northen Labrador and the Grand Banks off the island of Newfoundland is known as Iceberg Alley. I never tire of watching and photographing the huge, 10,000 year old chunks of ice as they float by, or when they become grounded close to shore. Today's photos, scanned from slides taken in the 90s, show icebergs that are part of scenes, rather than being the main subject of each image.

For those of you who have never visited Newfoundland and Labrador and have never seen an iceberg floating by on a bright, sunny, summer day, these images will give you an idea what it is like. The first shows a group of boats fishing for capelin. The iceberg nearby added an extra element to the scene. The crews on those boats were working, not admiring the scenery of Conception Bay like I was that day.

The teenage boys in the second image were watching the waves crash against the rocks in Torbay. I took several photos of them as the waves crashed, but I liked this one because the wave was at its peak, one boy was beginning to move back, and the icebergs in the background complemented the scene perfectly.

I really like the third image of Ochre Pit Cove, Conception Bay. The horse, rocky cliffs, few houses, barren land, large iceberg, then faraway cliffs show the stark beauty of this area of the province. The fourth image was taken in a rural area near Bonavista on June 25, 1997. I remember the date because it followed the landing of a replica of John Cabot's ship, The Matthew, that discovered Newfoundland in 1497. I photographed the event in near-freezing temperatures with rain, wind and drizzle. The Queen of England and many dignitaries from around the world were there - but that's a future series. :)

I also liked the white boat, red fencing and icebergs in the background at Flatrock. There were plenty of icebergs back then.

If you are interested in photos of Icebergs, I have 10 Iceberg Galleries on line at: http://www.lanephotography.com/icebergs/icebergs2.htm.

In addition, my son Mark and I produced a DVD with seven slide shows of icebergs and other productions. It also features music from several local musicians. Email me at blane@lanephotography.com for further information on this product which retails for $24.95.

Photos of the Day are for sale as stock photographs
and photographic enlargements.
They can also be purchased as slide shows
and/or wallpapers/screensavers.
at March 26, 2011