In 2004, My son Mark and I, travelled to Labrador to photograph Battle Harbour.
We were sitting on the deck after dark enjoying the peace and quiet when I had an idea for an interesting photograph. I set up my tripod and camera and asked Mark to take my flash and walk down by the nearest old house. I used a long time exposure as he moved from place to place, firing the flash by hand.
The image was as I hoped it would be; mostly dark with three "Marks". After we arrived home I added a "ghost" to the scene. It was actually taken from a life-sized photo of fishermen splitting fish.
The first image was cropped from the second to give you a closer view. I added the third photo to show the original photo from which I made a ghost. 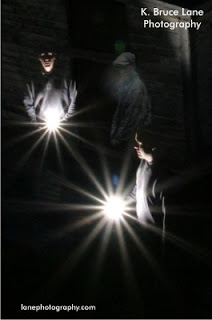 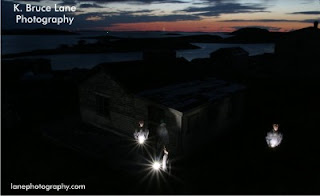 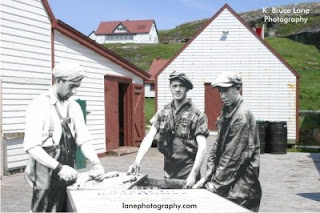