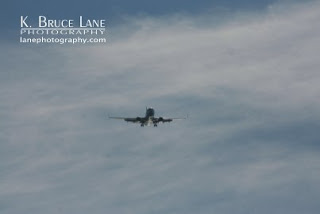 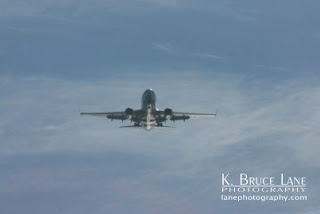 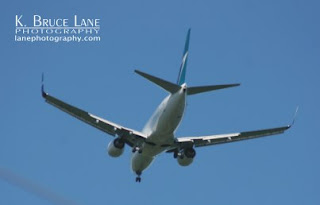 Several people responded to my question about raspberries. It has been identified as a dewberry and/or a low-dwarf raspberry. The berries are edible and the leaves can be used as a tea. I'll have to try making a tea out of the leaves.
On Monday, I was driving along Marine Drive near St. John's when I saw a jet approaching the airport. I stopped the car, changed lenses and photographed the jet as it approached and passed directly over me. When taking this type of photo you won't have much time because of the speed of the approaching aircraft. You should use a fast shutter speed to avoid blurred photos.
Most people ignore the aircraft flying over the city because they see so many, but I watch and photograph them whenever I get the opportunity.
at July 23, 2008

Email ThisBlogThis!Share to TwitterShare to FacebookShare to Pinterest
Labels: aircraft, Newfoundland and Labrador